Reports have been swirling that a DeLuca’s Pizzeria will be a part of the Breckenridge Village Shopping Center revitalization. Jim Keet of JTJ Restaurants, one of the partners who bought the center at North Rodney Parham Road and Interstate 430, confirms that “while we don’t have a final signed deal” with owner Anthony Valinoti, “it’s 95% a ‘go.'”

Valinoti opened his enormously popular, Brooklyn-accented pizzeria in Hot Springs in 2013 and moved it to its current location, 831 Central Ave., in 2018. “Tony’s been a friend for years,” Keet says, and the deal to put a second location in Little Rock is in part contingent on a project to open other DeLuca’s outlets in other locations down the road. An employee at DeLuca’s in Hot Springs told us Valinoti is traveling and was not available for comment. 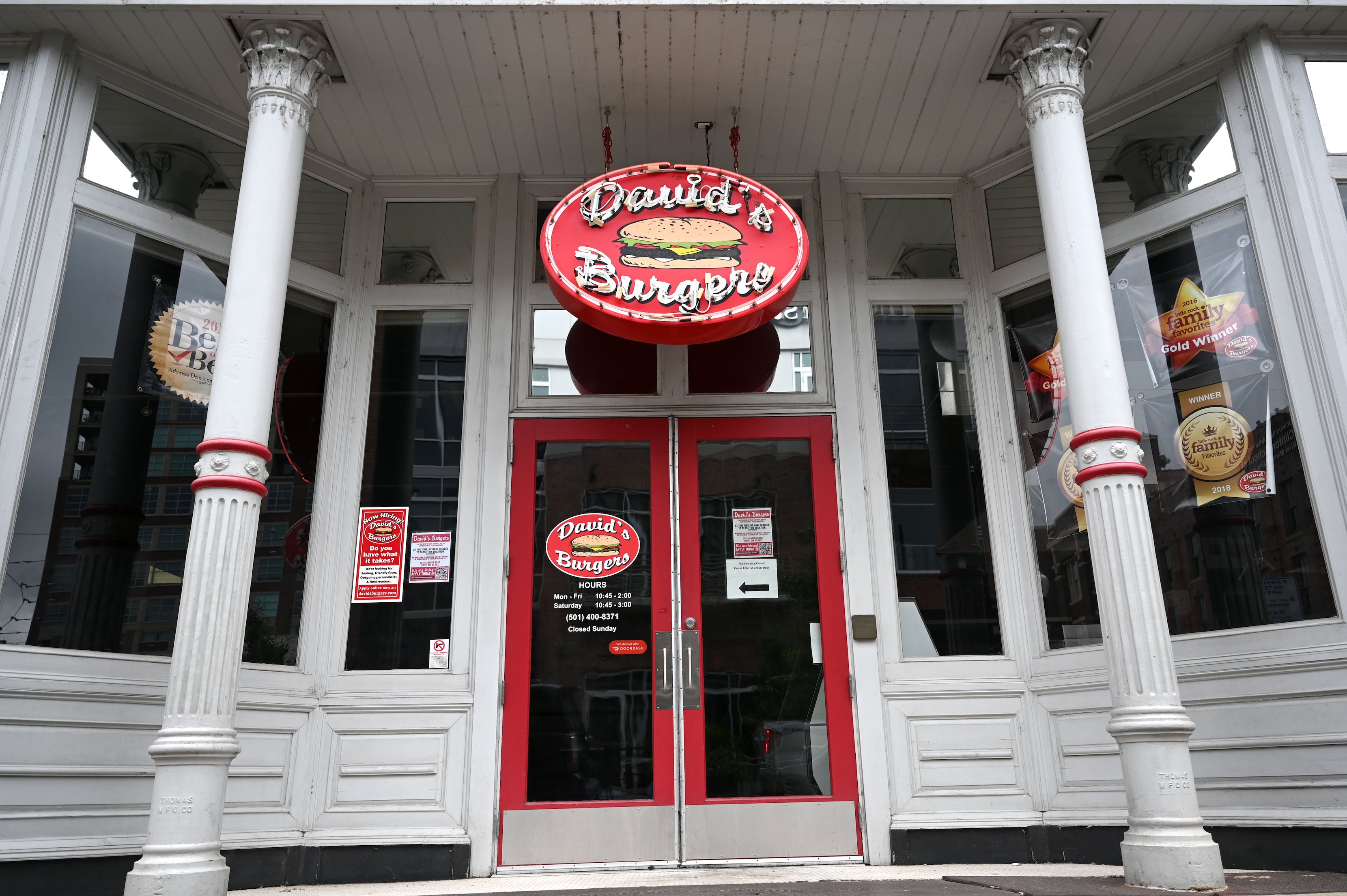 The David’s Burgers in the River Market Ottenheimer Market Hall closed in August 2021 with a sign on the door explaining the temporarily shut-down due to a shortage of workers. The restaurant reopened Monday. (Democrat-Gazette file photo/Stephen Swofford)
And speaking of mini-chains, an outlet of Benton-based Eat My Catfish is set for the east end-cap of the Riverdale Shopping Center, 2500 Cantrell Road, Little Rock, that used to house a Pizza Hut. According to a news release from management company Cushman & Wakefield/Sage Partners, the shopping center, also the home of an Ace Hardware, the Riverdale 10 movie theater, a Whole Hog BBQ Cafe and a Tuesday Morning store, changed hands last month; Eat My Catfish owner Travis Hester is a partner in the project. Plans for the center, according to the news release, include an upgrade to the facade, paint, parking lot and landscaping and “redevelopment of the outparcels for new tenants,” who will be “announced soon.”

And speaking of Davids, we recently learned of the resurrection of The Italian Couple, operating out of the ghost kitchen at 9813 W. Markham St., Little Rock, also the home of pizzeria Certified Pies. It’s the labor of David Waters, the son of the original couple, Yuli and Michael Waters, who opened their first Little Rock restaurant, serving Lombardi’s Tuscan recipes, in 1996.

As the story goes, the couple, from Pisa, Italy — she had trained as a chef in Florence — were living in California when they learned of Arkansas’ then-motto, “The Land of Opportunity,” from then-President Bill Clinton, took it literally and moved here. A Little Rock real estate agent found them the cheapest possible place to rent, a cinder-block building at 2618 W. 12th St., a couple of blocks east of Woodrow Street, that had housed an unsuccessful soul food-barbecue joint — not, it was generally acknowledged, in the best of neighborhoods.

The restaurant garnered rave reviews, was enormously popular and attracted a pretty high level of clientele, but it got robbed at gunpoint in September 1998, and the couple went back to Pisa. In 2005, they decided to give the Little Rock restaurant business another shot, opening in the eastern half of a brick building at 1900 W. Third St., but decided they weren’t giving enough time to their three children (including David, their eldest, born in 1997) and sold out in 2008.

For those many readers who are wondering what’s up with Shorty Small’s, which closed in February at 11100 N. Rodney Parham Road, Little Rock, with the expectation that it would eventually reopen in a new location, our answer is: We don’t know. Then-managing partner David Rackley on Feb. 8 posted a letter-slash-news release on the restaurant’s Facebook page (facebook.com/ShortysmallsWestLR) citing “42 incredible years at the corner of Rodney Parham and Shackleford” and that “Shorty Small’s is currently securing a new location in the Little Rock metro area and has begun talks for a new place in Branson, Mo.” We’ve heard nothing since and no longer have any point of contact; Rackley did not and has not returned emails; the contact phone number he supplied was for the restaurant, which, although it has never been disconnected, the voicemail box has long since filled up and no longer accepts new messages. There have been no posts on the Facebook page since that announcement. However, one of our readers recently spotted trucks outside the building and a sign announcing an equipment auction.

In case you’d been wondering, as we have, what became of chef Bonner Cameron after he left Allsopp & Chapple (we reported that Anthony Quintana had replaced him as executive chef Feb. 28), he landed on his feet at Petit & Keet, 1620 Market St., Little Rock, and is part of the recent launch of a new summer menu that includes Fried Guacamole with Crab Ceviche, Romano Crusted Chicken, Miso Salmon, Grouper Piccata, a Wagyu Short Rib, Lasagna Melanzana (grilled eggplant, house-made ricotta, pomodoro sauce and fresh basil), Summer Snapper and Bulgogi. (501) 319-7675; petitandkeet.com.

A “Can You Outcook a Fireman” barbecue competition, a fundraiser for a Cabot-area nonprofit supporting firefighters, is set for June 25 on the parking lot of Cabot High School, 401 N. Lincoln St., Cabot. It challenges area barbecuers to “bring your best plate,” says Mike Patton, one of the organizers — pork, beef, ribs, whatever. There’s a $20 entry fee — email [email protected] to enter; deadline is June 24. Setup starts at 6 a.m. Judging is on the basis of taste, presentation and tenderness; there’s also a fan-favorite award. Championship belt(s) go to the winner(s); trophies go to second and third place. They’ll let the public in — $5 to taste and vote — from 3-6 p.m.; judging takes place at 5. There will also be a dessert contest — entry is $10; register via the same email. Snacks, chips and drinks will be sold. For more information, visit the Facebook event page: facebook.com/events/3081372845413399.

And the Mount Sequoyah Center in Fayetteville will receive $10,000 from the the National Endowment for the Arts to support its Culinary Arts Food Experience (CAFE) and Writing NOVICE Program, which provide a culinary arts and writing residency for veterans. Participants will learn from a chef and receive guidance toward finding their culinary style while learning about food writing from a professional writer, according to a news release. The residency concludes with a banquet for veterans and community members. The Creative Forces Community Engagement grant comes in partnership with Mid-America Arts Alliance; a total of $750,385 is going to 26 organizations toward nonclinical, community-based arts programming “to address the distinct experiences, challenges and strengths of military-connected populations through the arts,” according to the release.

Has a restaurant opened — or closed — near you in the last week or so? Does your favorite eatery have a new menu? Is there a new chef in charge? Drop us a line. Send email to: [email protected]