Reverence on Frederick Douglass Boulevard is many lovely things: a rare fine dining spot in Harlem, a delightful East Coast take on California cuisine, and a sub-$100 prix fixe restaurant in a city where fancy dinners can easily command $500 or more. But perhaps most impressively, it’s also a venue that deploys a set of rules to tip the balance of power just a little further away from the stereotypically privileged patron, and back toward the people who feed us.

Remember when restaurants were boasting about performative safety protocols and “bipolar ionization” as they returned to indoor dining? Reverence used to take things further, requiring negative COVID results from every patron — even offering rapid tests on site. And even though the city dropped its vaccine mandate, staffers here still check for proof at the door. Folks must also click a box on the online booking site to confirm they’ve read a code of conduct agreeing to be kind to and show respect for the staff and fellow diners. And instead of tipping, the restaurant levies a service charge on the prepaid reservations.

Sometimes the rules go a little overboard, however. You show up to the restaurant wearing a mask (as requested, and as one should), and take a seat at a blond wood counter overlooking the kitchen. Chef Russell Jackson then sends out a flurry of amuses and, if you’re lucky, a plate of white asparagus with a black garlic sauce and cured salmon roe. The dark allium, as thick as syrup, grips the bowl like a Jackson Pollock splatter; it packs a rich flavor that’s not unlike beef demi-glace. One might be inclined to take a photo of this stunning tableau. Do not take a photo. Place cards inform diners of a phone-free policy in the restaurant. When Jackson sees someone typing away on their mobile device, he politely asks them to put it down, and then he might ferry over a cute framed card that reads: “What part about no phones or technology did you not understand? FINAL WARNING.”

Then he goes back to describing the asparagus.

Harlem, for all its diverse culinary riches, doesn’t boast the fine dining scene one might encounter in, say, Midtown or Tribeca. That’s not a criticism by any stretch. As the city continues to flood itself with chef’s counters, exorbitant omakase parlors, and white tablecloth spots, Upper Manhattan — like so many other swaths of the city — remains more low-key and accessible on the restaurant front. Still, fine dining remains, for better and often for worse, a key part of New York’s cultural scene, not to mention a good source of income for the people who work as operators, chefs, and servers in that field. It’s against that backdrop that Reverence feels like a compelling addition to the St. Nicholas Historic District.

Another key to Reverence is its reasonable price by fine dining standards, just $98 for five or so courses, though many will pay $108, since water — whether bottled or filtered — is a $10 surcharge. The restaurant serves a slightly longer menu on Saturdays for $170.

When I told Jackson — who says business at the restaurant is still down about 75 percent since before the pandemic — I’d be reviewing Reverence, he was glad someone was finally coming to give Reverence a full review of the food. With respect, the food at Reverence changes so often it’s hard to convey a fully accurate depiction of what one might encounter on any given night. But the ethos of the venue is a more intriguing constant. The code of conduct constitutes a small effort to keep customer entitlement at bay, a reality that has reared its ugly head during the pandemic. And the old testing policy along with the vaccine requirement — Jackson tells me he’s worried about his young son, who only recently became eligible for a shot — functions as a reminder that there’s a more equitable way to dine out for everyone.

But yes, the food is good too. Some might compare it to, say, the forage-y fare at Blue Hill at Stone Barns, albeit with more powerful and sometimes pungent flavors. Jackson himself, who grew up in Los Angeles, references the West Coast cooking of chefs like Alice Waters and Jeremy Fox during his tableside speeches. On a recent weeknight, dinner kicked off with four small plates: crispy rosettes with black chickpea miso and sliced radishes, a pile of sweet pea gelee with galia melon (cool and vegetal), sliced rainbow trout with cabbage-tomato-jalapeno brine (a light, silky ceviche of sorts), and a very peculiar ‘nduja, typically a spicy and spreadable pork paste from Calabria. Jackson instead makes his version from sturgeon, salmon, and albacore, lacing the fish scraps with chiles, winter citrus, and strawberries. He lets the concoction age until everything becomes unctuous and meaty and spicy. He manages to pull this off without any low-tide fishiness, though a few slices of fresh peach tame the oils with their sweet, summery fragrance.

After the white asparagus came a green garlic and Gruyere souffle, Jackson’s hat tip to a similar dish at Chez Panisse. Steam gushes out from the craggy dome when you drop a spoon in, before a cooling slurry of pea and cumin creme fraiche quickly takes the heat off. The dish is a subtle ode to soft egginess and allium-based spiciness.

Jackson undersalts his fish for my taste; a dry-aged striped bass, like a slab of yellowtail on a previous visit, could’ve used a little extra seasoning, but the rest of the dish was a carnival of spring: sugary peas in a light, bright onion jus. By now you can get the drift of what Reverence is going for: light and sometimes foamy sauces or vegetable juices. If there’s protein in a dish, and there often is, it rarely speaks more loudly than the mushroom or vegetable next to it.

Last Thursday, Jackson served a tiger nut-laced chocolate mousse topped with bruleed marshmallow for dessert, but I’m still entranced by his apple torte from April. The chef baked his confection with what seemed like almost no sugar; it mimicked a celery root pie in its savoriness, with a drizzle of fermented bee pollen for a balsamic-like tang. No thanks. Then I sampled a scoop of sweet marzipan ice cream on the side and everything fell back into place. The apples tasted like apples again. This was pie not as a comfort but as a challenge, a sly deconstruction.

I wish I had a picture of that confection; Reverence doesn’t post many food photos on its social channels. And as for the phone-free policy, Jackson tells me he employs it to keep diners present, recounting how he remembers food better without the aid of technology, and how he’s witnessed patrons with selfie sticks disrupt expensive meals elsewhere. Fair enough, though I like to think there’s a happy medium.

Diners often look at photos before going to a restaurant just as they might read Shakespeare before seeing a live play. It might ruin the surprise, sure, but it teases you and primes the mind on what to focus on during a live performance, whether theatrical or gustatory. Then you go home and let the pics jolt your taste memory — or you pick up that copy of Macbeth again. For Jackson, however, maybe there’s a grander scheme, which isn’t just to help diners be present, but to be just a little bit different from the rest of the pack. This is, after all, a city where every famous restaurant dish gets replicated a thousand different times on TikTok, Instagram, and other channels. Indeed, maybe that’s what makes Reverence particularly compelling; you actually have to go to experience it all. 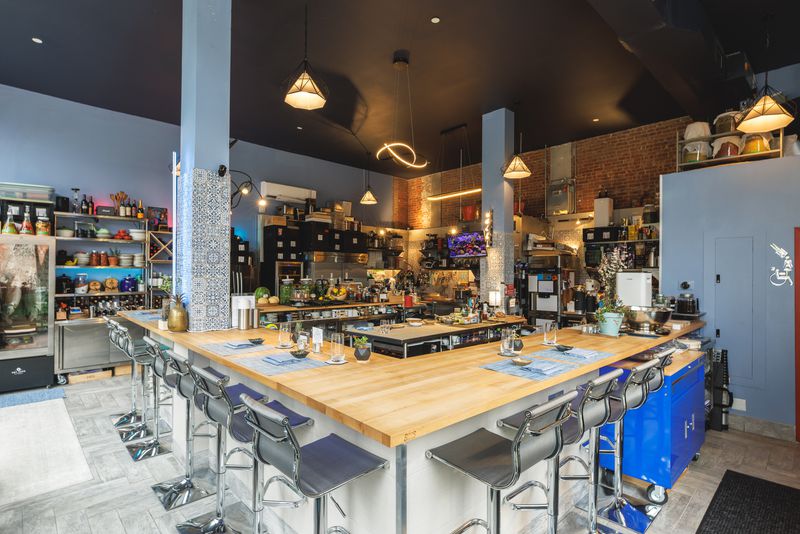 Bonus tip: All meals are fully prepaid via Tock, though patrons can also choose to order thoughtful wine pairings, by beverage director Zwann Grays, the night of, for as little as $85. Limited by the glass selections also available.