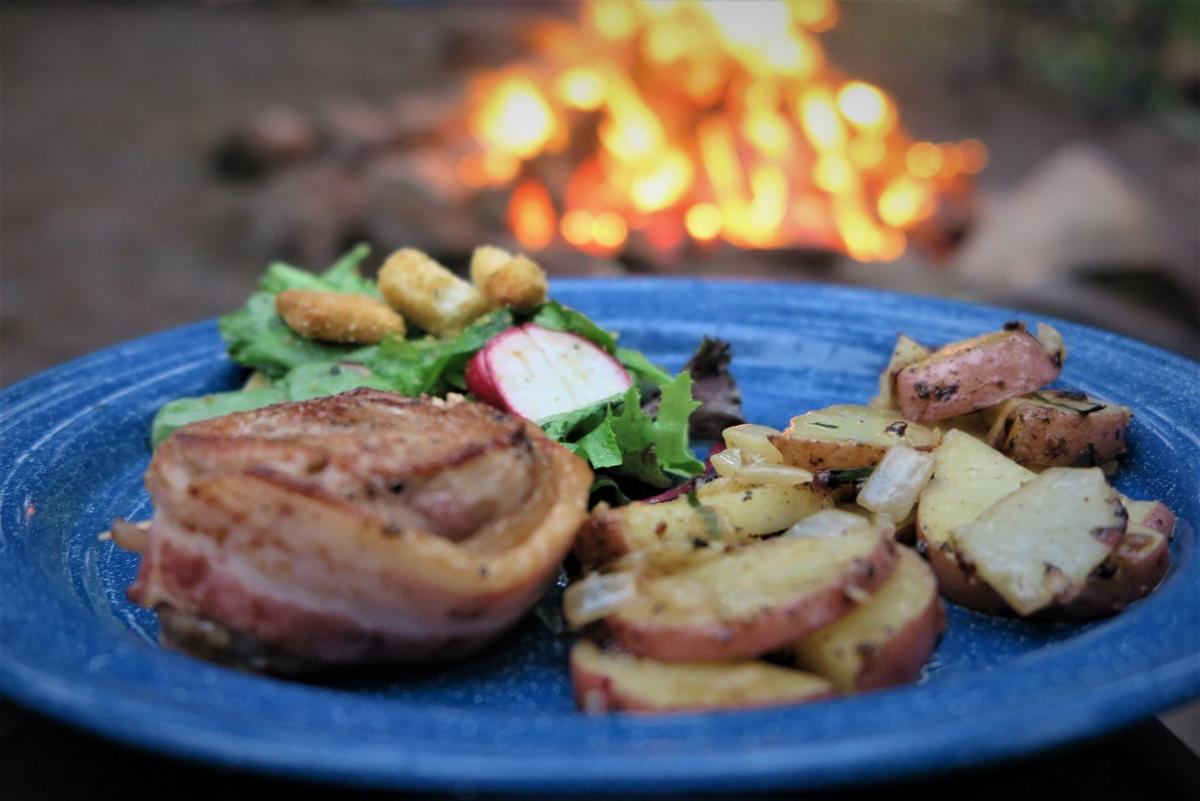 Even in the rain, Lenette Kosovich and her kitchen crew cooked up bacon wrapped pork with potatoes and a tossed fresh greens salad. 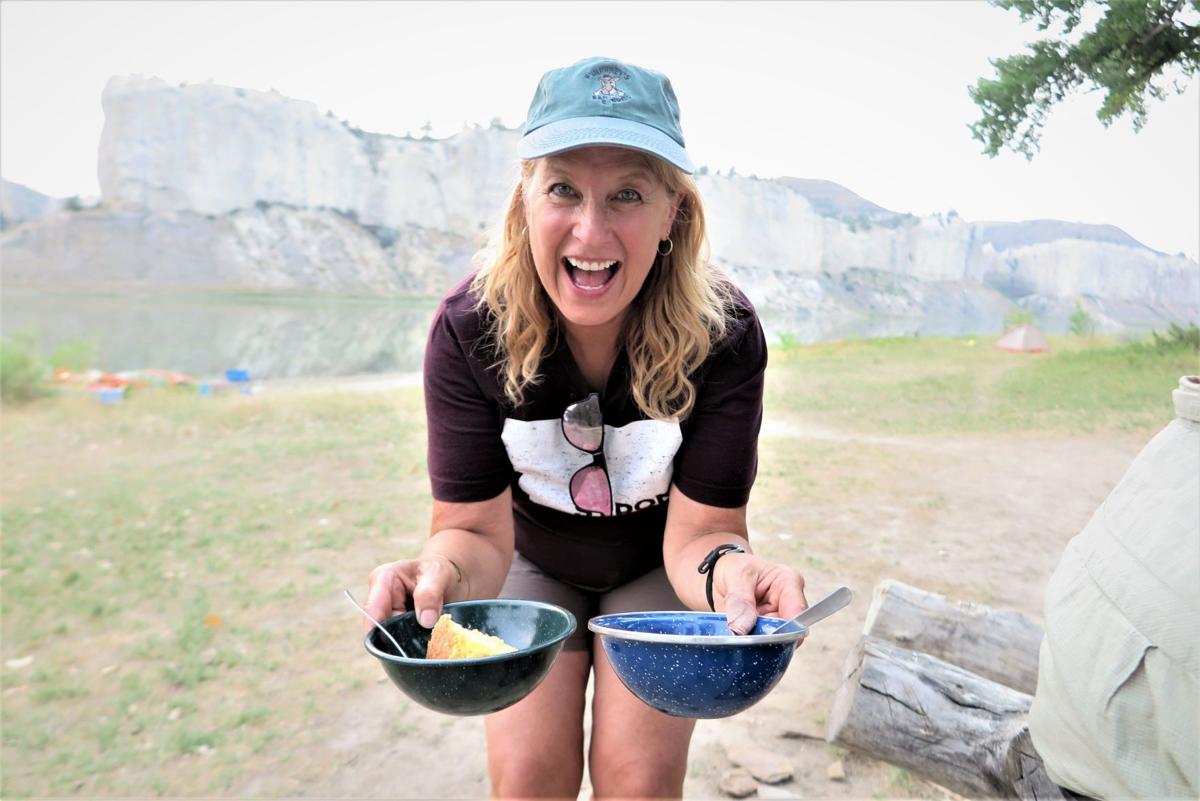 Lenette Kosovich headed up the cooking at camp each night. Here she is offering up slices of lemon cake made from scratch by Jenice Fuguere, Missouri River Outfitters’ owner Nicolle Fuguere’s mother. 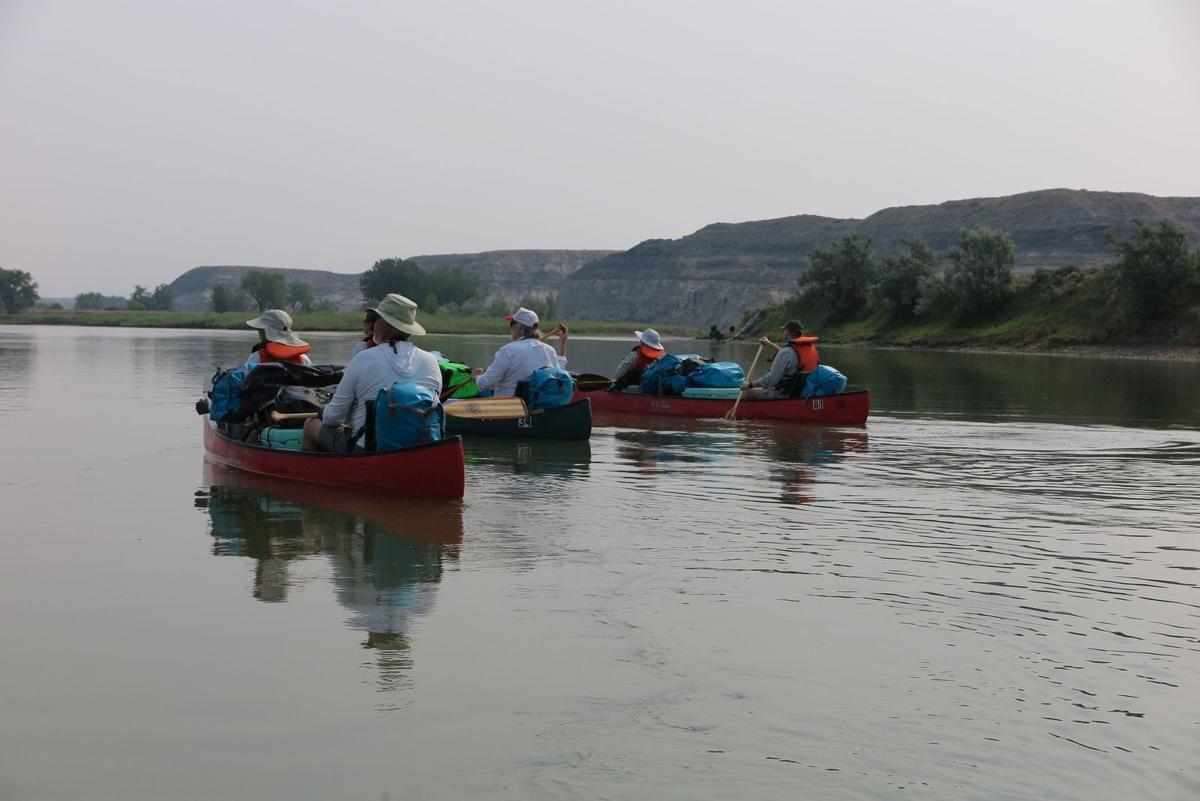 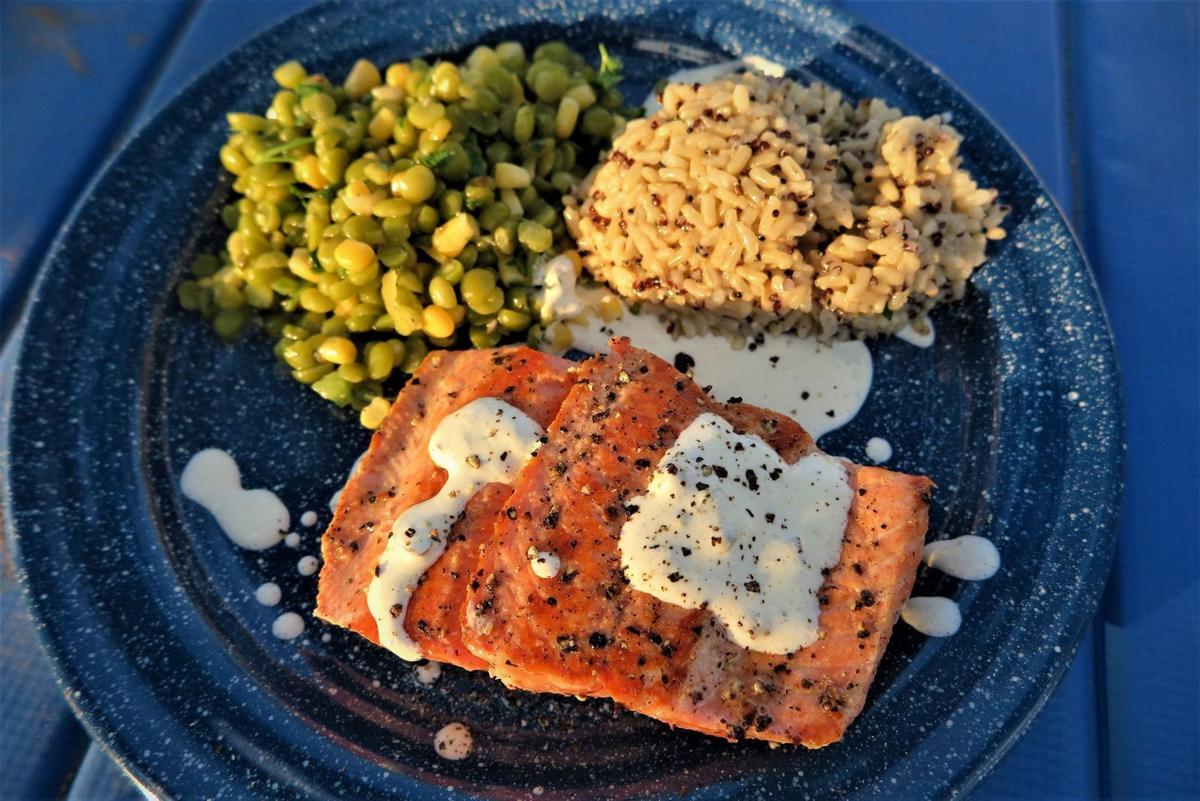 Fresh salmon with split pea and corn salad accompanied with rice makes for a great reward for a day of canoeing, at times, against a head wind. 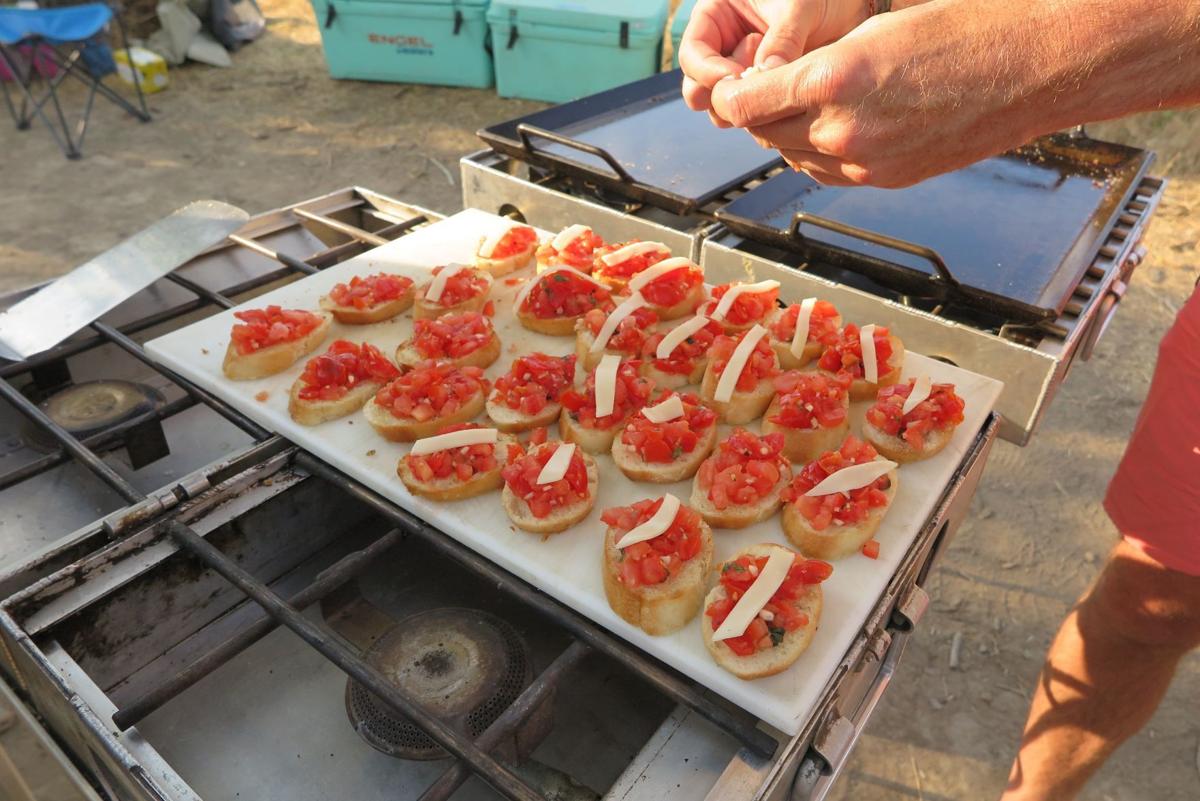 Garlicky basil tomato bruschetta started this evening’s meal after a full day of rowing down the Upper Missouri River with Missouri River Outfitters. 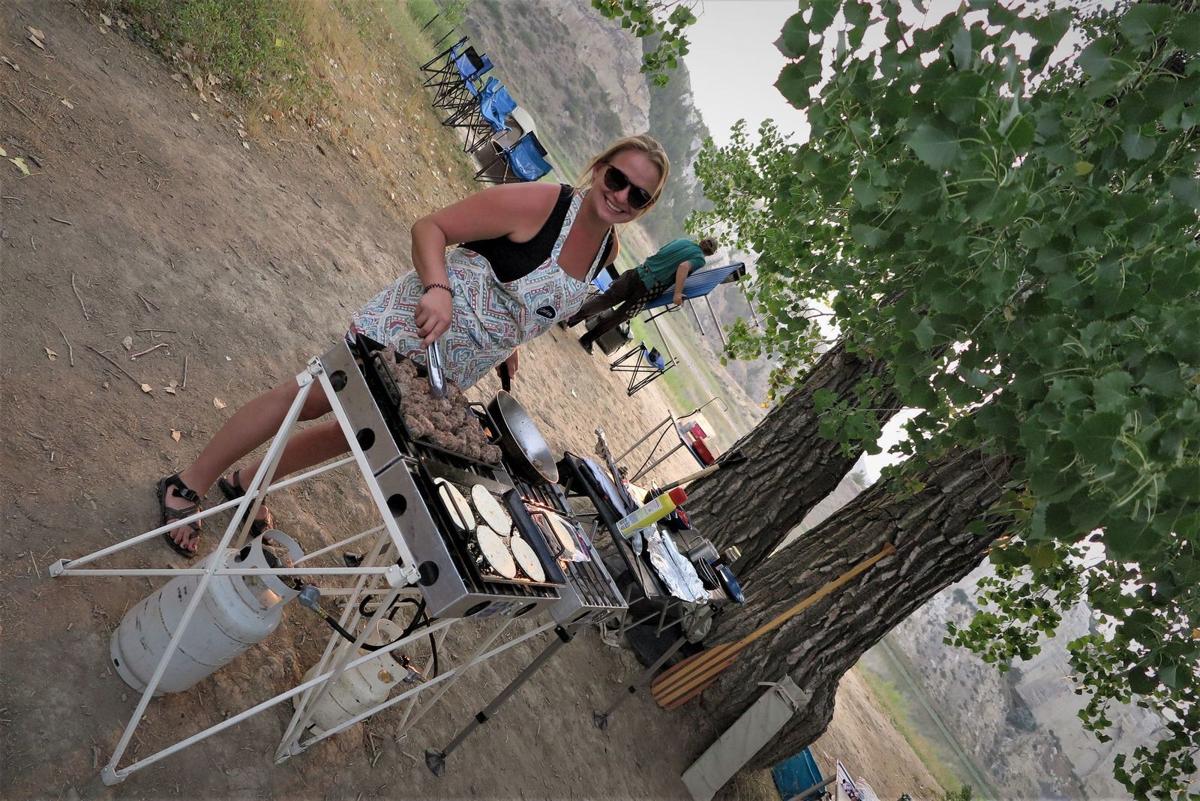 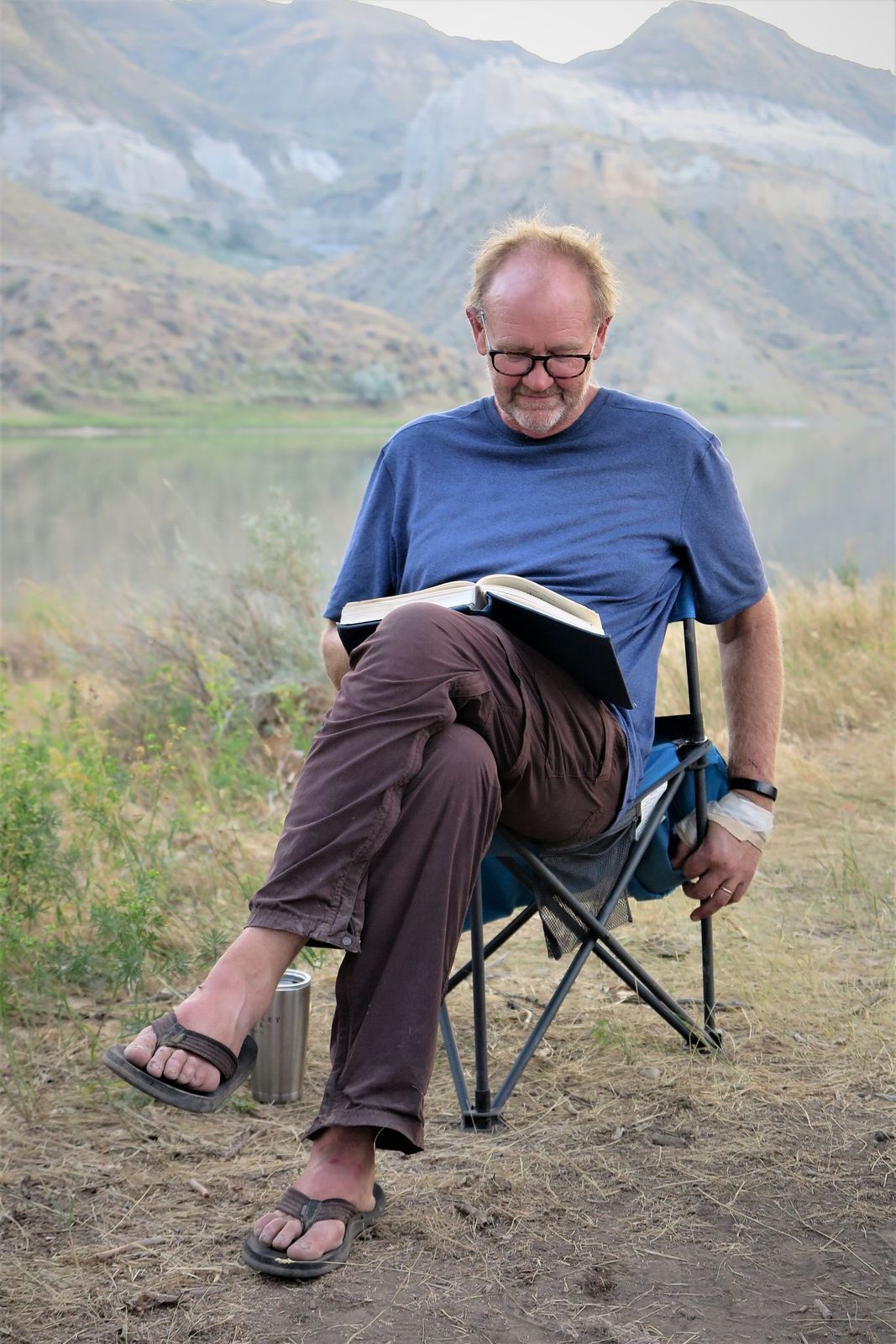 Historian Keith Edgerton reads from the journals of Lewis and Clark after dinner. 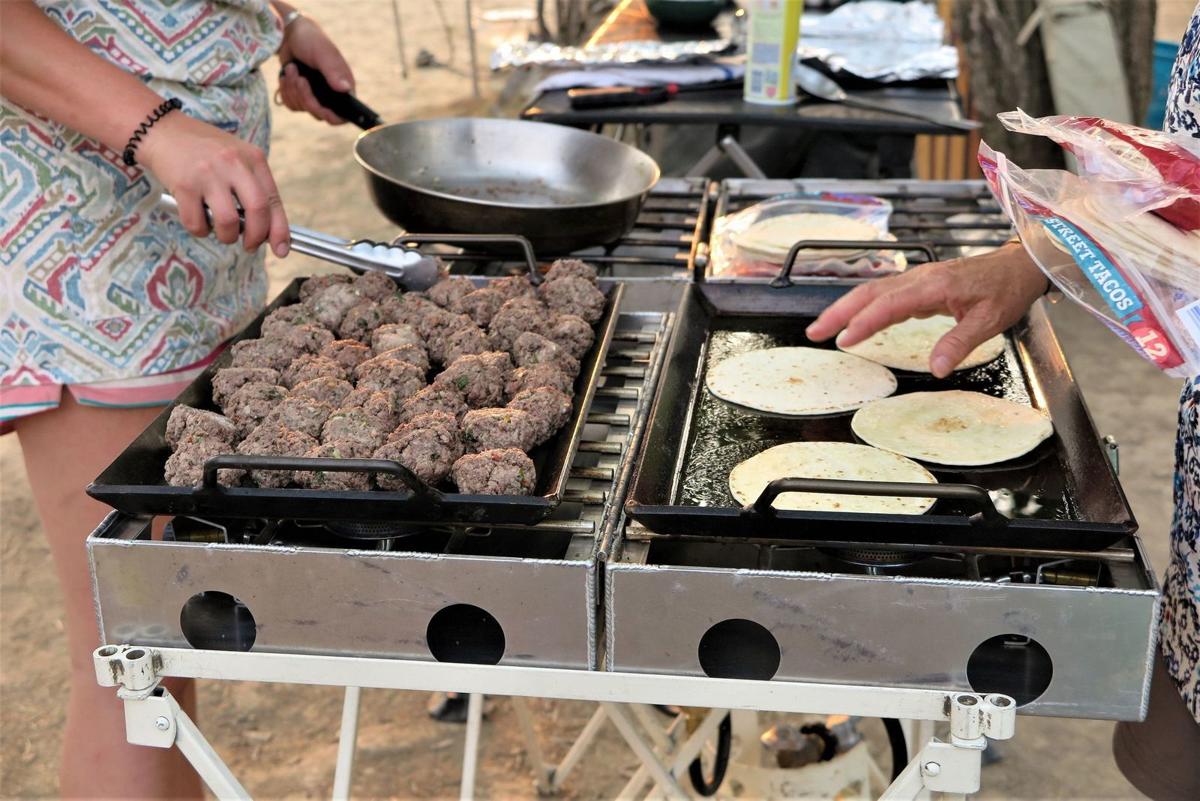 The first night’s meal at Eagle Creek was lamb meatballs with tortillas cooked on propane grills under a grove of cottonwood trees. 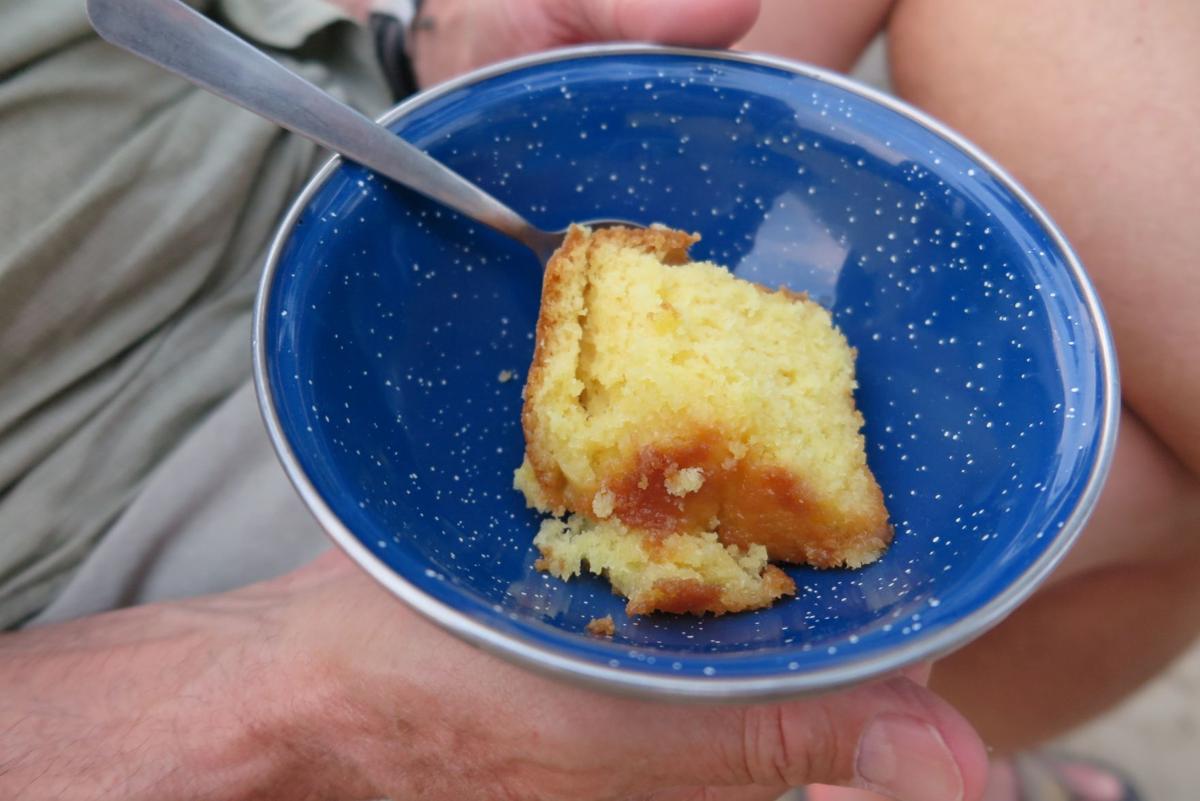 The perfect end to a day’s paddle with Missouri River Outfitters, lemon cake, served in the great outdoors. 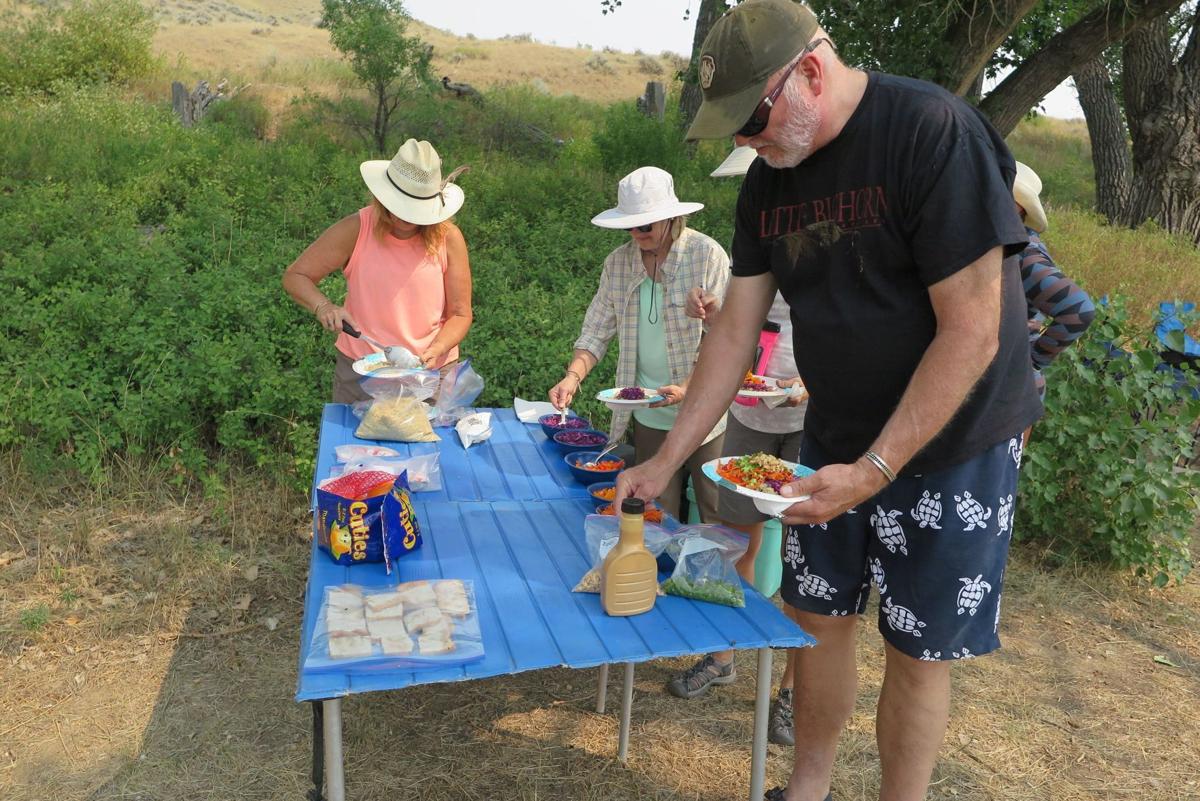 Our first lunch at Little Sandy gave us the introduction to the fresh food that was to come on our four-day adventure down the Upper Missouri River. As Lenette Kosovich puts the final touches of lunch, Jay Loken and Sheryl Constanzo fix up a plate of quinoa salad. 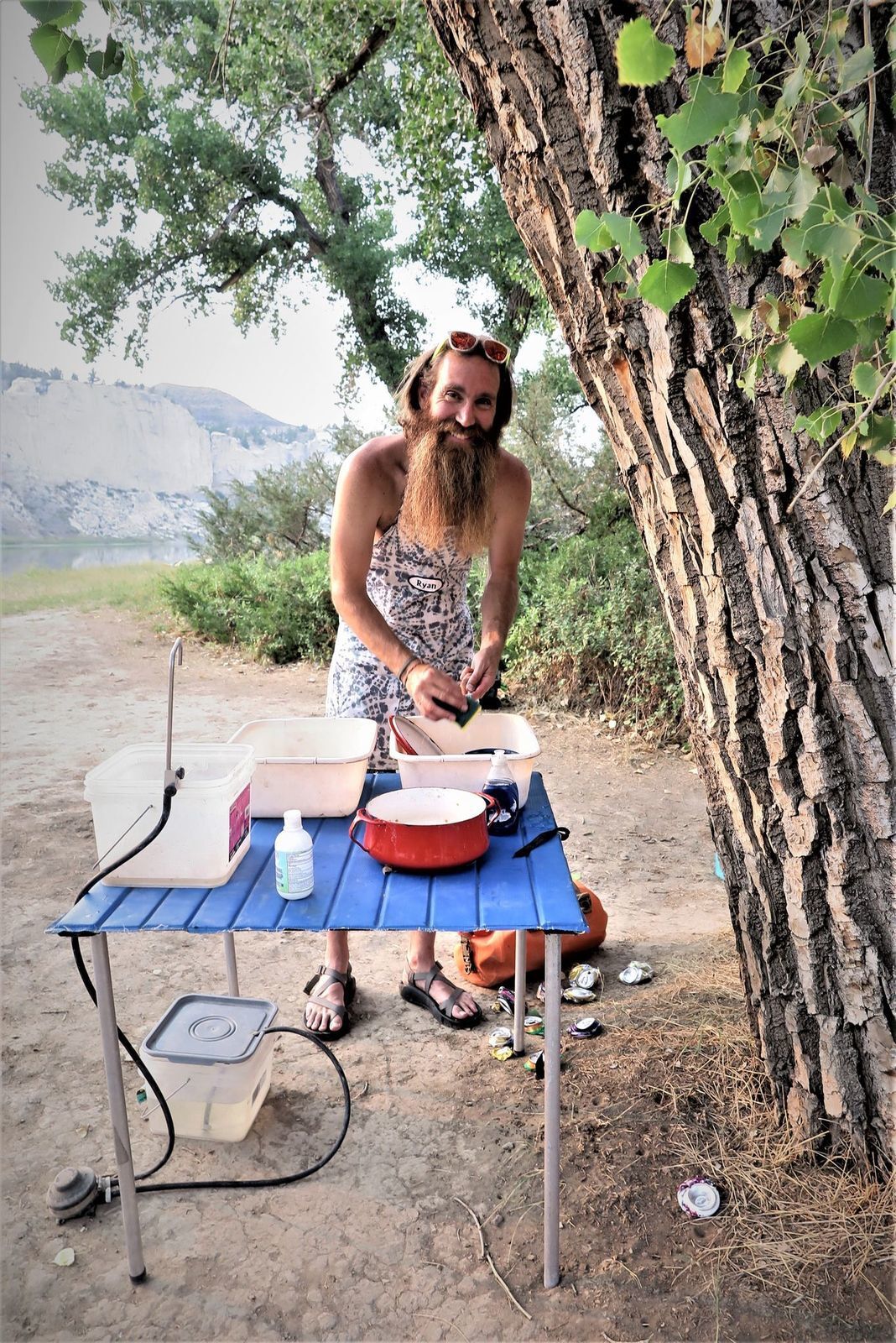 Ryan Watkins not only set up camp for our group but cooked and washed dishes, making our time with Missouri River Outfitters fun, relaxing and easy. 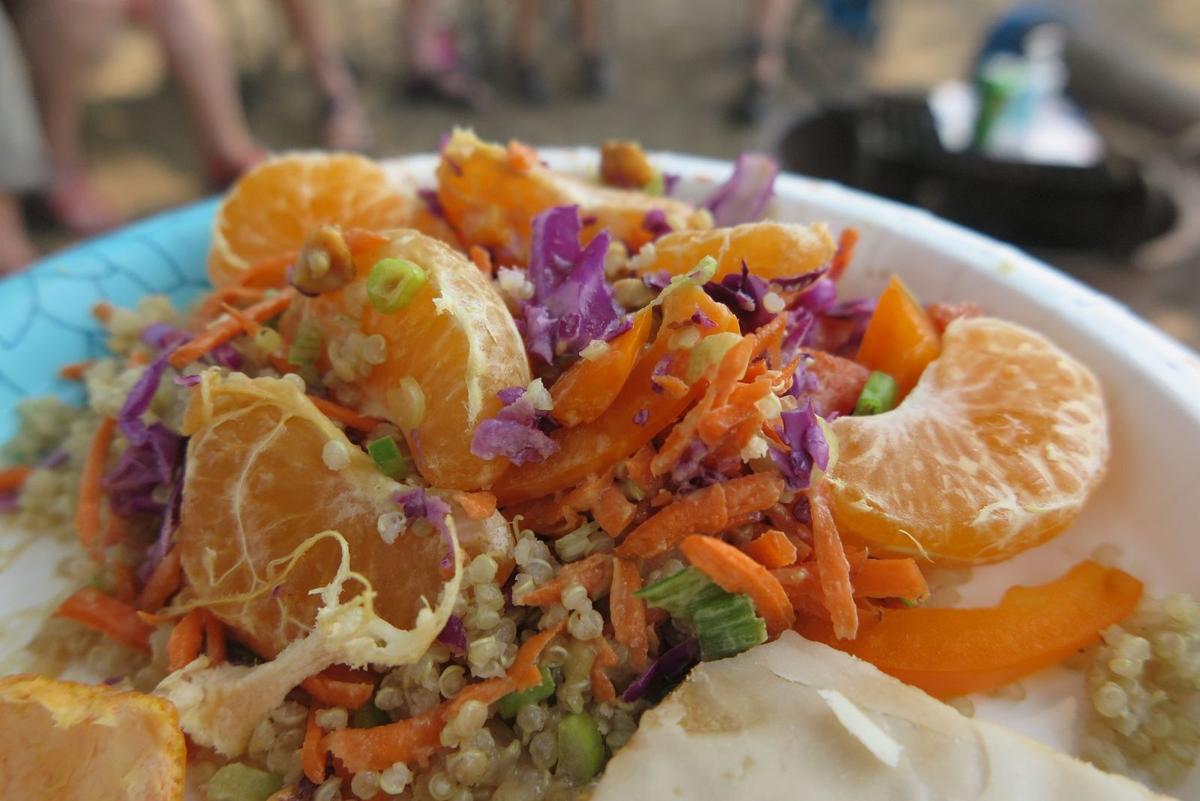 For our lunch on the Missouri River, a salad buffet with quinoa, shredded carrots and cabbage, sliced green onions, quinoa and housemade peanut was a fresh and healthy beginning to our four-day trip. 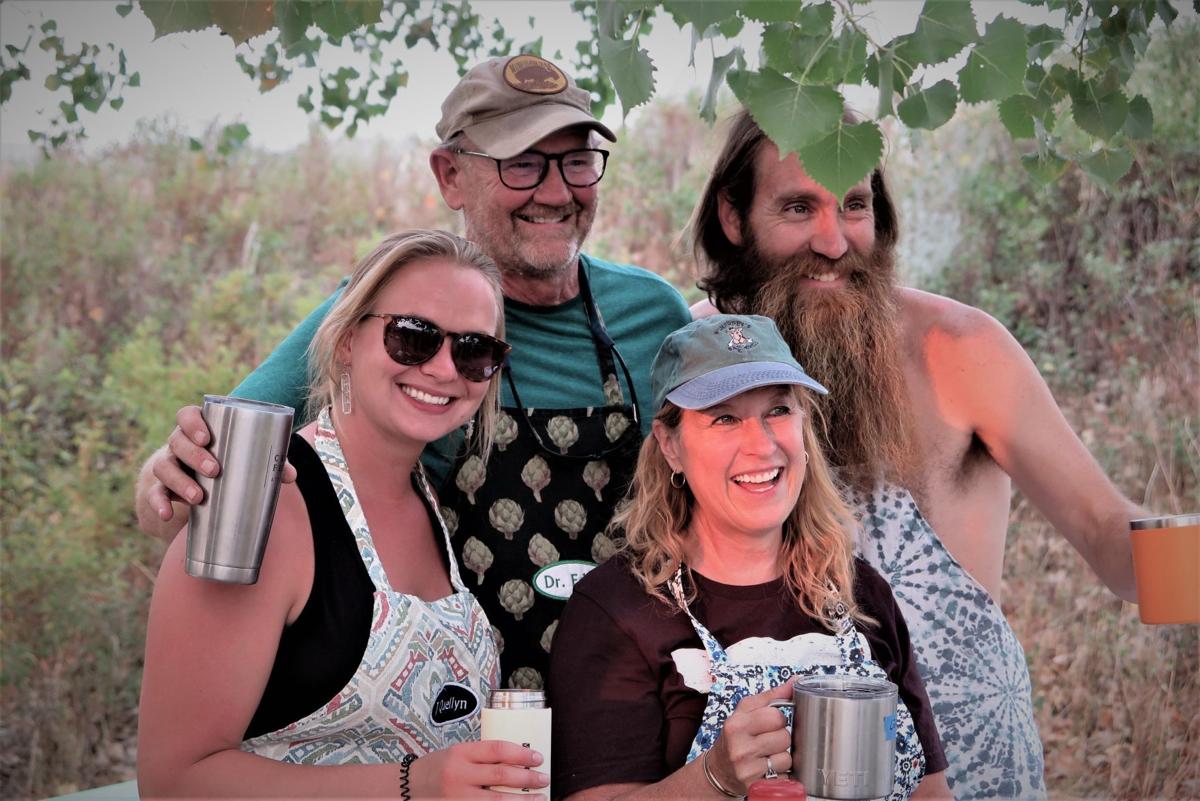 From left to right: Jacquellyn Bomgardner, Keith Edgerton, Lenette Kosovich and Ryan Watkins of Missouri River Outfitters after cooking a dinner of lamb meatballs and tortillas for our first night on the Upper Missouri River.

Missouri River Outfitters (MRO) changed my view of “roughing it.” My memories of instant oatmeal, ramen noodles, and coffee crystals mixed with hot cocoa and mini marshmallows were replaced by a new vision of camp cooking. MRO’s owner Nicolle Fuguere and her team showed how food cooked in the wilderness does not have to be as primitive as roasting a freshly caught trout on a stick or boiling water on a canister stove to rehydrate freeze-dried beans for chili.

From Coal Banks Landing to Judith Landing, 10 of us were escorted down the 47-mile stretch of the Missouri River by guides Jacquellyn Bomgardner and Ryan Watkins, teamed up with Montana State University history professor Keith Edgerton and his wife, Lenette Kosovich. The four-day adventure took us by the sandstone White Cliff section that Meriwether Lewis had described as having “a most romantic appearance.” We experienced a variety of Montana weather that brought several hot days, high winds and a violent thunderstorm.

We replicated a small segment of the journey that began Feb. 28, 1803, when Captain Lewis and Second Lieutenant William Clark led the Corps of Discovery in search of a route to the Pacific Ocean. Over four years and thousands of miles, they explored lands and rivers, and met Indigenous people heretofore unseen.

We watched the MRO team load the canoes and wanted to help, but knew we would just be in the way. They shoe-horned coolers filled with iced beverages, fresh and frozen foods, and jerry cans of potable water at a gallon per person a day into our boats. Grills and propane for the mobile kitchen along with creature comforts of lawn chairs, tables, tents and cots were squeezed into every cranny, with our personal gear, safely in dry bags, stacked on top. The freeboard sank ever closer to the water line with the three cases of wine we brought along.